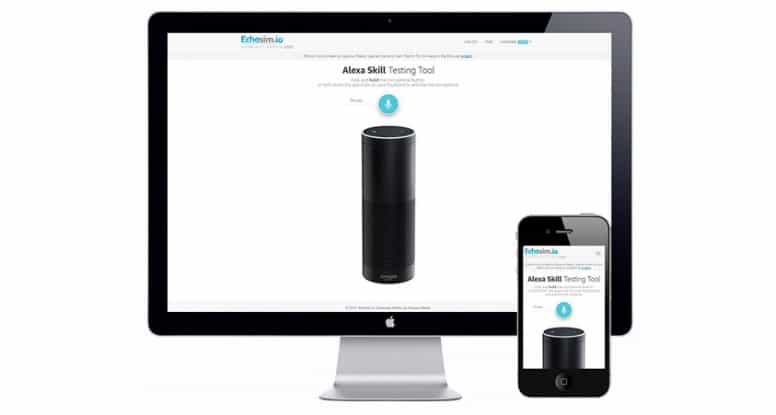 iQuarius Media Stakes Out Its Place in the Voice Design Revolution

“It’s been a great experience to participate in a project that helps other developers to flourish their ideas and improve user’s experience using voice user interfaces and Alexa Voice Service. We are living exciting times with the current wave of technologies getting in the hands of developers to create great experiences.”
~ Pablo Liz, Echosim.io Lead Developer

Ever since the Amazon Echo became a surprise hit product, mainstream audiences have been turned on to what those of us in tech have been excited about for a long time — truly useful, intelligent interaction with the technology in our midst. Advancements in IoT, wearables, and voice-controllable hardware like the Echo show how technology can be more than just things. They’re showing their potential to become an extension of us.

Voice control has been biggest tech disruption on this front. Alexa, the cloud-based voice assistant that powers Amazon Echo, is the underpinning for the growing world of voice-enabled products and services. Since spring of 2016, iQuarius Media has become a prominent part of the developer-focused ecosystem that Amazon has built around Alexa with our EchoSim.io project.

EchoSim, the Echo Simulator, was inspired by UK-based developer Sam Machin’s AlexaWeb project and developed for Amazon by iQuarius Media. The simulator lives on the web at EchoSim.io, offering hardware-independent access to the Alexa Voice Service (AVS). The site has become an active hub for developers as well as the Alexa-curious from around the world, whether or not they have access to an Echo/Dot/Tap or other Alexa-enabled hardware.

EchoSim.io supports Amazon’s mission to get as many developers as possible into the world of voice design. It offers virtual access to an Echo with only a web browser and Amazon login credentials. With EchoSim, developers have tested their custom Alexa functions called skills; hackathons have demo’d hundreds of participant projects without needing a physical Echo; and corporate boardrooms have been able to sell the idea of voice control to stakeholders who may not otherwise have understood its value.

Of course, it’s also fun to tinker with. It explains the many thousands of users who drop by EchoSim.io regularly to try commands out. User numbers have only ballooned since the announcement in September 2016 that Alexa would support UK English and German.

Press Coverage and Growth of EchoSim

From our vantage point, we have a unique view of the growing interest in Alexa. EchoSim’s popularity has grown in tandem. As more and more developers build skills, EchoSim has shown itself to be the most popular web-based Alexa testing tool that can mimic Echo’s visual feedback in addition to JSON responses. EchoSim has been featured at Amazon Developer, major tech blogs, and web magazines. Most recently, TechCrunch gave iQuarius a mention in their post about expanded language support in AVS.

EchoSim.io is built on original code based on open-source and third-party modules. Our goal was to create a flexible, scalable base to make it easier to expand features and continually enhance the app. Docker containers make new versions portable and help us maintain an active update/expansion schedule without interruptions in service. In the front-end, Bootstrap gave us a solid framework and Jinja2 templates helped keep code tidy. Server-side handling of audio and HTTP/2 calls ensure we can offer better support for different browsers and devices, such as optimized audio for mobile delivery. Currently implemented Python libraries have support for server pushes, giving us room to tweak visual representations of interactions as EchoSim responds to AVS cloud-generated directives.

Documentation, marketing, and responding to user feedback is part of iQuarius’s services for EchoSim, all done in collaboration with Alexa developer marketing teams.